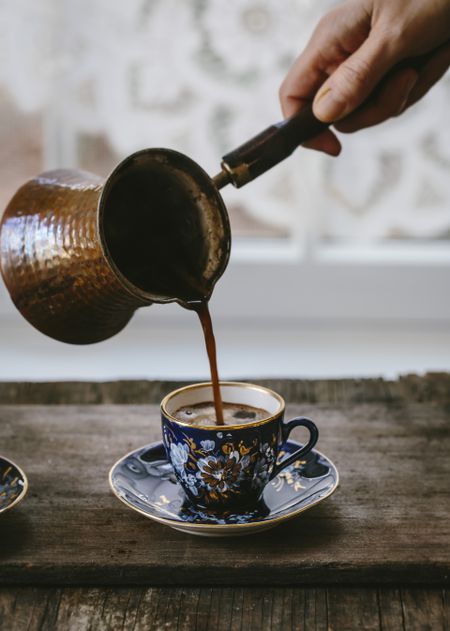 This is our ultimate guide to turkish coffee and the ceremony surrounding how it is served – one of the oldest coffee rituals in the world.

It will come as no surprise if the first thing that crosses your mind when you hear the words “Coffee Ceremony”, is the traditional Ethiopian Ceremony we covered on our first post on the series “Coffee Rituals around the World”. However, the list doesn’t start and end with Ethiopia, and there are other places and cultures where coffee is more than just a hot, comforting brew. One of those places is Turkey, and in this week’s post, you’ll learn all there is to know about how coffee is brewed, served and experienced in Turkish culture.

There is a slight contrast between Ethiopian and Turkish coffee ceremonies. The Ethiopian Ceremony is a very well established ritual with a specific set of steps or stages mainly practiced in Ethiopian homes, especially when guests call. In Turkey, coffee permeates most aspects of culture and everyday life. Coffee is ceremoniously prepared and served in nearly every place that caters to social gatherings, not just in the home. In fact, coffee was initially introduced in Turkey during the 16th century in Coffee Houses – a picturesque sort of Turkish café – and only reached homes many years later.

Today, you can experience Turkish coffee in modern coffee houses, cafés and coffee shops throughout the country, but you’ll also find it at business meetings and in special social events and occasions, weddings, you name it. In fact, it’s so much a part of Turkish culture, and it is so unique, that it was inscribed in 2013 in the UNESCO list of Intangible Cultural Heritage of Humanity as a part of Turkish Cultural Heritage.

The particular brewing technique used, and the way it’s served, makes for a completely different experience compared to your daily cup of Joe. The overall taste obviously depends heavily on the quality of the beans, but compared to a cup of filtered coffee, Turkish coffee has a stronger, more aromatic kick, as well as a lot more body thanks to the fact that it’s served along with the grounds without filtering. A thick aromatic foam on top is also a hallmark of a well-prepared cup of Turkish coffee. 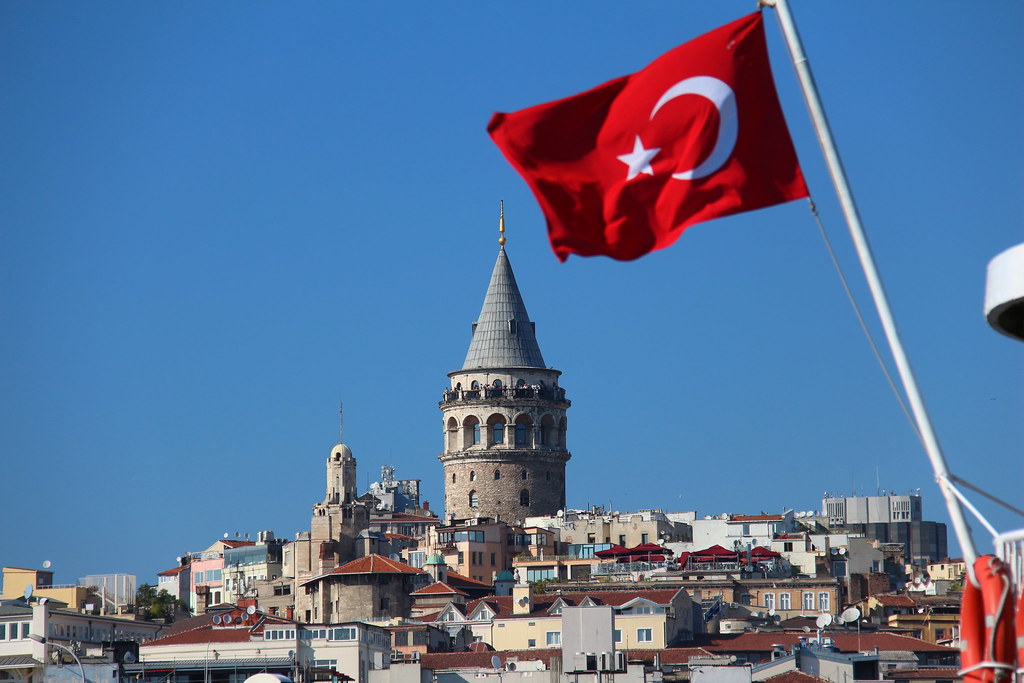 The Steps of the Turkish Coffee Ceremony

The first stage of the ceremony involves grinding the freshly roasted coffee beans. This is sometimes accomplished with a decorated mortar and pestle, but more frequently with a specialized traditional hand grinder or mill. The grind is essential in attaining the perfect cup of Turkish coffee, as it’s the only brewing method in the world that requires a very thin powder or dust. This is something that very few modern electric grinders can achieve, making traditional Turkish grinders essential for the ceremony.

Another uniqueness of Turkish coffee preparation is the way it is brewed, because the grounds and sugar are mixed with cold water, and they’re all heated to a boil together in special coffee pots called Cezves, instead of boiling the water separately. The pot is usually heated in a regular stove, but some coffee houses heat their coffee pots in hot sand, which brings the boil a lot quicker and affects the extraction of flavors and aromas. 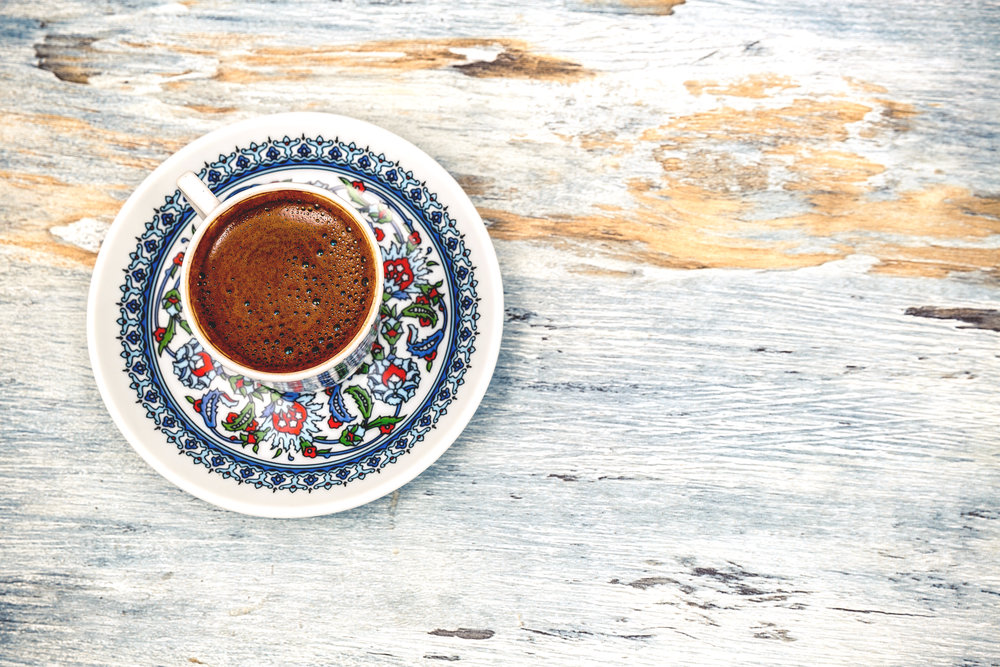 Once brewed, the first thing you’d think is … “ok, now we filter out the grounds, right?…” Wrong! One of the points to grinding the coffee to a fine powder is to leave the grounds and serve the brew along with them in small porcelain coffee cups. The powdered grounds add a lot of body to the coffee and gives it a much stronger taste. In this sense, Turkish coffee is reminiscent of matcha tea. There is a tradition in the cups used as well, which are richly decorated Turkish works of art. Along with the coffee, you will also get a glass of water, and usually some Turkish delights to further sweeten the experience.

Now that everything is served, the guests to the ceremony drink their coffee while they chat and socialize with everyone else. People talk about pretty much anything from local gossip to national and international news. However, a reunion to drink coffee at home or at a coffee house is also an opportunity for more intimate conversations between family, peers and friends. Since the time of the Ottoman Empire, drinking coffee while sharing new thoughts and old stories has been a strong and rooted tradition.

Middle-eastern cultures can sometimes be superstitious and include certain esoteric beliefs, one of which is a particular type of divination called tasseomancy (literally, cup divination). At the final stage of the Turkish coffee ceremony, once you have finished your cup, you are encouraged to turn it over on top of your saucer and leave it there to settle. After a while, once the leftover grounds have settled, the cup is turned over again and the host or hostess (or someone else who knows tasseomancy) interprets the figures and images that the grounds form in the bottom of your cup to tell your future. Whether modern Turks really believe in this sort of divination or whether they do it just for entertainment is beyond the point, but its practice is as rooted to their culture as the coffee they drink. 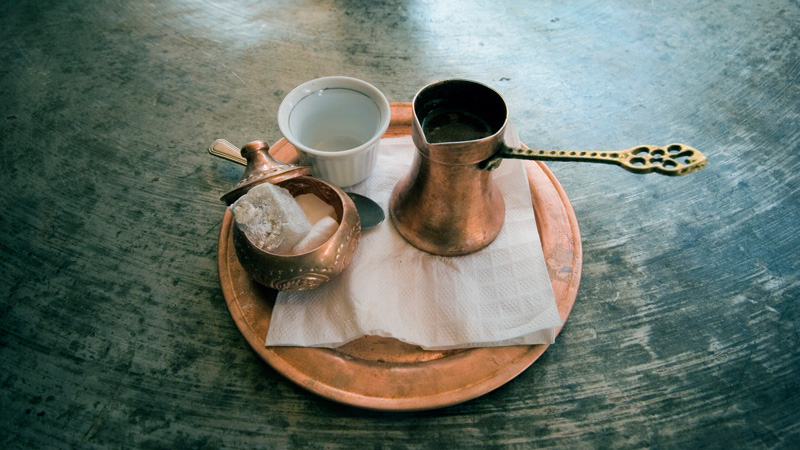 As you just learned, the Turkish coffee ceremony calls for special instruments to help get the brew just right. Here is a list of the three most important tools and utensils you’ll find at traditional Turkish homes and coffee houses:

Hand Grinders: The traditional coffee grinder, called “kahve degirmeni” is a long tubular mechanism, operated by hand, that can turn roasted coffee beans into a thin flour-like powder. It’s highly unlikely that your common electrical grinder will ever reach such a thin and perfect grind, completely free of hard particles. These utensils were traditionally handcrafted with noble metals such as silver, but cheaper versions made of brass and copper are also common. They are also exquisitely decorated with beautiful images and patterns, usually of religious nature. Even though there are modern stainless-steel versions with excellent performance, an original traditional Turkish coffee mill is a much more elegant way to keep to the old ways of coffee making.

Turkish Coffee Pots: The Cezve we mentioned earlier is the traditional coffee pot used to brew Turkish coffee. It’s also handcrafted in silver or other highly valued metals. It has a conical, wide bottom shape that shrinks to a smaller cylinder on top. This shape helps form the thick foam that’s characteristic of Turkish coffee.

Turkish Coffee Cups: known as “fincan”, Turkish coffee cups have two characteristic features: they’re small in size and capacity, holding only about 60-70mL of coffee per serving, and they’re richly decorated and have a matching saucer to allow the final reading of the grounds. There are a couple of variants that go from the traditional decorated porcelain handled cups, the no-handled “gawa” cups, or even a version of gawa cups encapsulated in a metal basket with a handle, which are usually called Ottoman style coffee cups.

As you can see, in Turkish culture, coffee is much more than just another cup of espresso in the mornings to kick-start your day; it’s an unwavering part of life and traditional society that coexist with the modern world and will continue to do so for the years to come, as it has during the past five hundred years.