Coffee Rituals around the World: The Ethiopian Coffee Ceremony 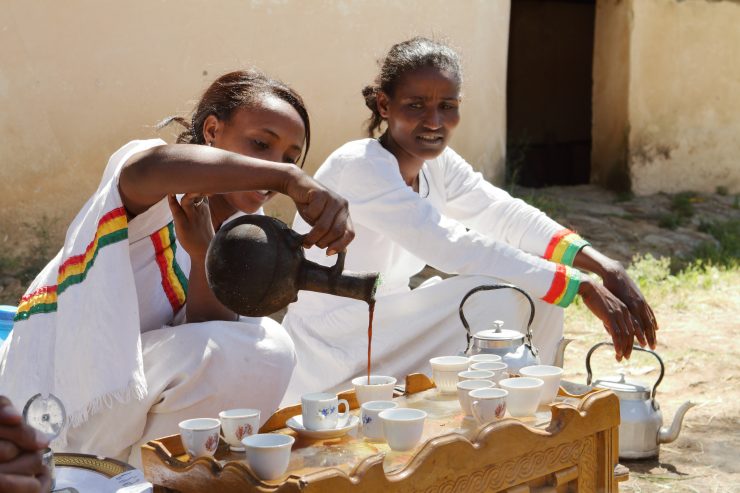 Coffee has always been a social drink. That doesn’t mean that you can’t enjoy a comforting cup of coffee while you’re alone, but nothing beats getting together with your friends and family and enjoying your favorite type of coffee while you chat away about any topic. However, there are places where drinking coffee is much more than a small part of your morning routine. In some cultures, coffee takes a more ceremonial tone, one that is passed down from one generation to the next. In our series on “Coffee Rituals around the World”, we’ll be covering the most ancient and traditional ways to prepare and share coffee. In this week’s post, the first one of the series, you’ll learn about the ongoing tradition at the birthplace of our beloved brew: The Ethiopian Coffee Ceremony.

What is the Ethiopian Coffee Ceremony?

You can think of a coffee ceremony as a sort of ritual: a series of traditional steps taken to make, serve and drink coffee. The Ethiopian Coffee Ceremony is the way it has been done throughout the years in Ethiopia, the cradle of the first coffee trees. Even though it’s known as Ethiopian, it was also originally practiced in other African countries like Eritrea.
If you thought this was anything like serving the afternoon tea in the UK or inviting someone to your favorite café, then think again. The entire ceremony can last over two hours and encompasses the entire transformation from green coffee beans to cup.
Yes, you read right. The ceremony starts off with green coffee beans and it implies roasting, grinding, brewing, serving and, finally, drinking the coffee.
Talk about freshness in your cup!
The ceremony usually takes place three times a day in the most traditional households of Ethiopia, and it’s a must at any given time when guests call. To be invited to one is a show of friendship and respect, something that is highly valued in Ethiopian culture. 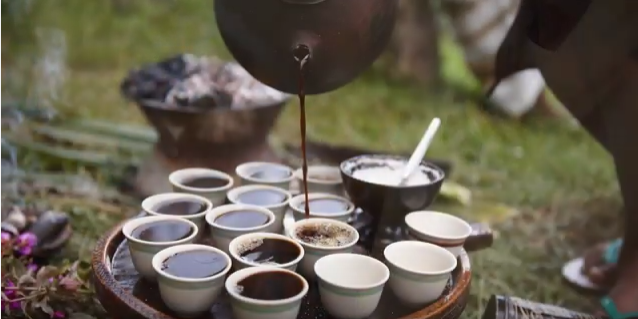 The Stages of the Ceremony

The entire ritual consists of four stages, reminiscent of the steps of the coffee process, right after you have the green coffee beans. A young woman dressed in a traditional Ethiopian dress usually performs the entire ritual. The venue is prepared by covering the ground with long-cut scented grass and flowers, and incense is burned throughout the ceremony, making it a very spiritual experience for the newcomer.

It all starts with the roast. Beans are roasted on a flat pan on top of a small charcoal stove. The roast allows for a lengthy and friendly chat about pretty much anything. As the beans roast, the scent of the aromatic oils in them mixes with the incense to give a unique aroma, unlike any you’ll find in any home or downtown café in other places. When to stop roasting the beans is entirely dependent on the hostess’ experience and ability.

The Grind
Once roasted to a rich and shiny dark brown color, beans are then crushed with a traditional mortar and pestle called, respectively, “mukecha” and “zenenzena”. With these rudimentary instruments, uniformity of the grounds is an issue, and it’s probable that the coffee won’t taste the same every time, even in the same household and even if prepared by the same person. This is because grind size can bring out different quality notes in coffee, as it seriously affects the subsequent extraction during the brew.

Brewing
Coffee is brewed inside a long necked black clay coffee pot called “jabena”. The hostess adds the freshly roasted and crushed coffee beans to hot water inside the pot, and then filters it several times on a fabric made of horse hair. The end result, the coffee brew itself, is called “bunna”.

Pouring the Coffee
Another peculiarity about this ritual is the way the hostess pours the coffee. It is, perhaps, one of the stages that require the most practice on behalf of the apprentice. Coffee is poured from the jabena from a height of about a foot or more, in a single stream, into a neatly organized array of china cups, called “cini”. It takes a lot of practice to perform this task gracefully, and to avoid spilling too much coffee, but there will always be some spillage.

Serving the Guests
Finally, once the coffee is ready and poured, it is the task of the youngest child of the host family to serve the attendants. This is also done as a ritual. In some cases, the guest of honor is served first, but it’s much more common for the youngest child to serve the eldest member of the family before anyone else.

During the time it takes to complete the whole ceremony, guests commonly enjoy popular snacks like peanuts and popcorn, which the hosts readily provide.
The roots of Ethiopia’s culture goes back hundreds of years, and the coffee ceremony is loaded with its symbolism, beliefs and superstitions. It’s not just about drinking coffee and having a good time while you gossip around with your next-door neighbor. If you’re a guest at an Ethiopian Coffee Ceremony, keep in mind that there will be three rounds of coffee served during the ceremony, named “abol”, “tona” and “baraka”, and all guests are expected to accept and drink each one. Abol and tona symbolize pleasure and contemplation, respectively. However, the third service, Baraka, is the most important cup, as it symbolizes a bestowed blessing. 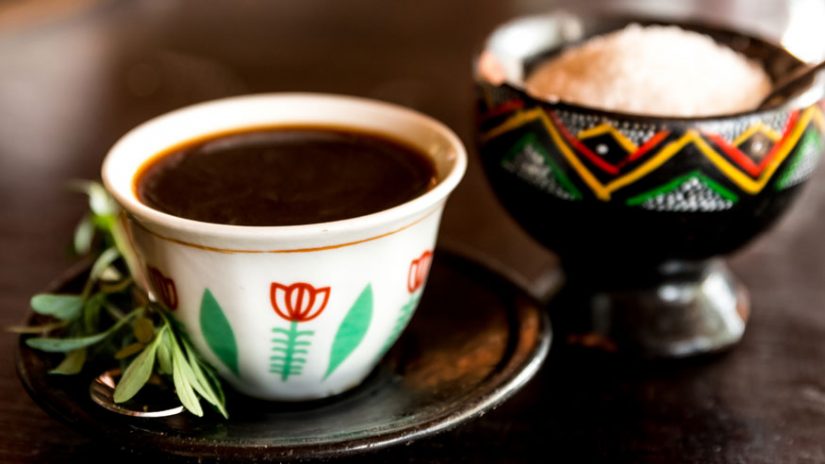 In the country where coffee was first discovered, and where numerous different species and subspecies developed, you’ll find no shortage in variety regarding flavor and quality. If you combine that with the particular skills of the hostess in each family (who acts as a specialty roaster and barista, all rolled into one), you can imagine that each ceremony you attend will be unique. As a part of any coffee lover’s bucket list, our hope is that this ongoing tradition stays alive and keeps passing down from one generation to the next, for all the years to come.